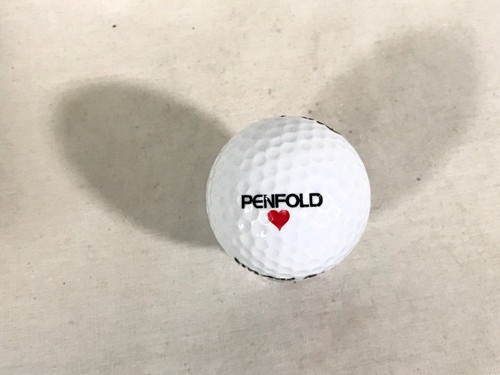 In the hit 007 James Bond thriller Goldfinger(1964) starring; Sean Connery as agent 007, a Penfold Hearts Golfball was used successfully by James Bond to defeat Goldfinger. The Stoke Poges Club, where this scene was filmed, is located 22 miles west of London. The Hearts is one of four golfballs that used to come in this Penfold set. The others were; Clubs, Diamonds and Spades. Now you to can beat the Goldfingers of the world with a heart. This Golf Ball Replica is a standard size Wilson 4 ball with the Penfold Heart logo silk screened on one side as shown in photo. It comes Brand New in a Blue Velvet like bag.
This Replica Penfold Hearts Golf Ball does not come with Acrylic Display Plaque as shown in picture. It is available as a option in pull down menu.
The Display Plaque is High Quality, Magnetic Sealing, 4x6x1 inch, Acrylic item with Poster Art from Film. This also comes with a Solid 2x2x1 inch Acrylic Item Stand and smaller Plastic Circular Stand to set Golf Ball on for display.
×