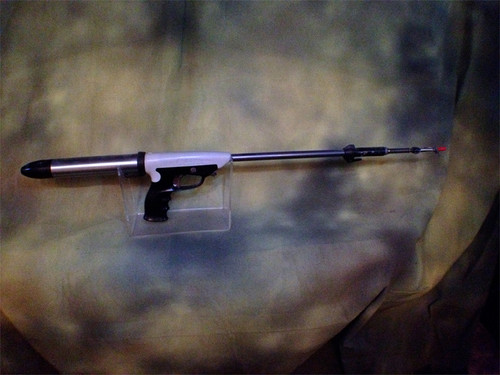 As seen in the 007 James Bond thriller "Thunderball" (1965) Starring; Sean Connery, This is a Real Prop Speargun from the film. It is a Jaguar model from the Italian firm, Technisub. This was obtained directly from Pinewood Studios in London. While large numbers of Spearguns were purchased for Thunderbal only a handfull of Jaguars were purchased. could this be the gun that shot Vargas? possibly. It was a Jaguar model the gave him the point. The spear tip has been replaced and the shaft partially restored. the gun is otherwise in original condition. Gun is in excellent "Screen Used" condition. Comes with acyrillic stand as shown. It also comes with a letter of authenticity.

007 James Bond, The World Is Not Enough, Metal Box Real Prop From film