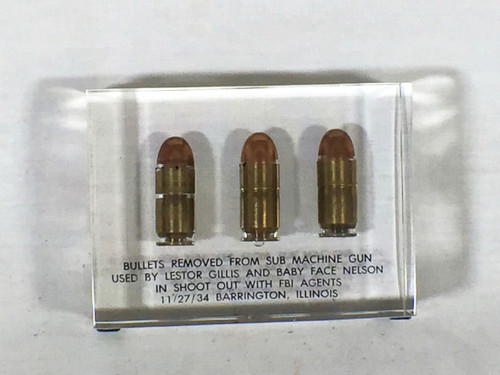 This item is three .45 caliber bullets that were originally recovered from Baby Face Nelson's submachine gun following the deadly 'Battle of Barrington' on November 27, 1934.

The Bullets are in excellent condition and are encased in a 3.75 inch wide x 2.75 inch high x 1 inch thick Acrylic block with the caption below it: 'Bullets removed from sub machine gun used by Lestor Gillis and Baby Face Nelson in shoot out with FBI agents 11/27/34 Barrington, Illinois.' Of course Lestor Gillis and Baby Face Nelson are one and the same. But that is what it reads.

Lester Joseph Gillis (December 6, 1908 – November 27, 1934), known by the alias George Nelson, better known as Baby Face Nelson, was an American bank robber in the 1930s. Gillis was given the nickname Baby Face due to his youthful appearance and small stature, although few dared call him "Baby Face" to his face. Criminal associates instead called him "Jimmy". Nelson entered into a partnership with John Dillinger, helping him escape from prison during the famed Crown Point, Indiana Jail escape, and was later labeled along with the remaining gang members as Public Enemy Number One.

Nelson was responsible for killing more FBI agents in the line of duty than any other person. Nelson was fatally shot by FBI agents during a shootout called The Battle of Barrington, which these Submachinegun Gun bullets were used at.

This item was originally Displayed and obtained from the National Museum of Crime and Punishment in Las Vegas.

Item comes complete with a Certificate of Authenticity from the famous RR Auction House.