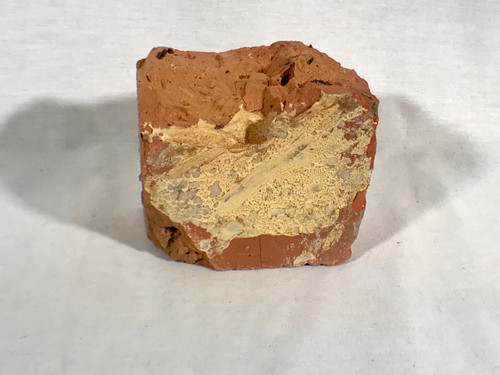 This is a Actual Piece of Brick from one of the chimneys of Bonnie and Clyde's East Hideout, deep in the woods of Bienville Parish, Louisiana.

Bonnie Elizabeth Parker (October 1, 1910 – May 23, 1934) and Clyde Chestnut Barrow a.k.a. Clyde Champion Barrow (March 24, 1909 – May 23, 1934) were American criminals who traveled the central United States with their gang during the Great Depression, robbing people and killing when cornered or confronted. At times, the gang included his older brother and his wife Blanche, Raymond Hamilton, W.D. Jones, Joe Palmer, Ralph Fuits and Henry Methuen. Their exploits captured the attention of the American public during the "Public Enemy Era,"  between 1931 and 1935. Though known today for their dozen-or-so bank robberies, the two preferred to rob small stores or rural gas stations. The gang is believed to have killed at least nine police officers and several civilians. The couple were eventually ambushed and killed by law officers near the town of Sailes, in Bienville Parish, Louisiana. Their reputation was revived and cemented in American pop folklore by Arthur Penn's 1967 film Bonnie and Clyde.

The Historic Brick is in excellent condition. The condition does not imply that the brick is perfect condition or completely free from wear and tear, imperfections or the effects of aging. This item being 75 years old has wear that a normal object of that age would have. The brick  Weighs: 3 pounds and measures: 3.5 inches wide x 3 inches long x 2 inches thick. Brick comes with a wooden stand with a photo of the hideout (with two visible chimneys), and a descriptive caption affixed which reads, "This brick was part of one of the chimneys of Bonnie and Clyde's last hideout. The hideout they were going to when ambushed by law enforcement officers May 23, 1934. The hideout was located deep in the woods on an old stagecoach road just south of the Sailes community. The hideout was burned to the ground intentionally years ago by the owners of the land because of the interest that it drew and the fear that someone would get hurt. All that was left was a pile of bricks. This is one of those bricks."

The Brick was originally acquired from the Bonnie and Clyde Museum in Gibsland, Louisiana. It comes complete with a Certificate of Authenticity from the famous RR Auction House.