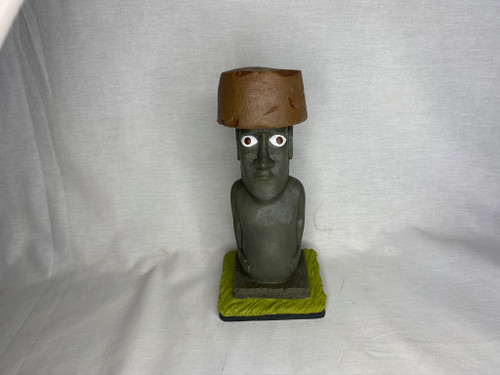 A small island in the Pacific Ocean was Discovered by white man on Easter Sunday in 1722 hence called Easter Island. Upon Exploring the island over 900 to 1000 Statues were found. These Statues ranged from 6 foot to 56 foot in hieght. The Natives on the island lived in Grass Huts and lacked the knowledge to carve them. The Statues were also Originally Quarried and Moved across the island. There has been much debate about who made them and moved them?

This is a Signed, Numbered, Limited Edition Replica of the Easter Island Statue With Hat. It is a Very Highly Detailed Reproduction and was created from an Artists Rendering that was made using Photographs taken of the Real Statues as they appear on the island. Each Easter Island Collectable comes complete with a Signed, Numbered Certificate.

The Limited Edition Ancient Mystery Replica Easter Island Statue is Dark Grey in Color as the Originals, with Grass painted Green and Hat painted a Brown Color. This Statue also has Eyes painted on it just like the Real Statues. It is made out of Solid Resin, weighs 2 lbs and measures 10 inches tall x 4.5 inches wide x 3.5 inches deep. The Hat is removable.
The Easter Island With Hat Collectable also comes with a Signed Free Copy of our Full Color, 24 page Book Easter Island, Moai, and Rapa Nui by James Arnold. The Book is about the History of the Island and Statues on it. It includes a Map of island and various Historical Newspaper Articles as they have appeared through History plus Actual Historical Photos of the Real Easter Island Statues.
×