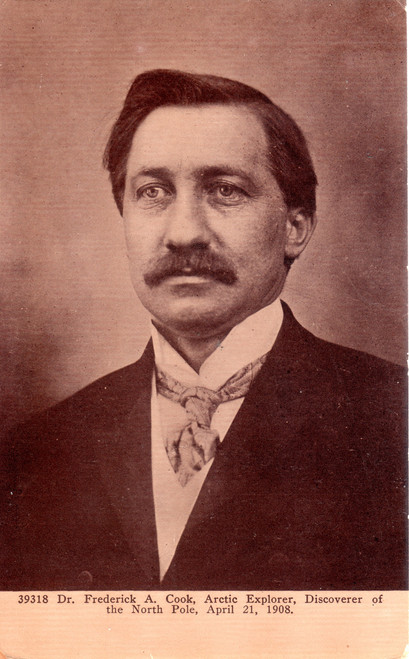 This is a Very Rare item. Two Unusual ANSs, two pages Frederick Cook writes a copy of the first telegraph he sent after reaching the North Pole. Also included is a poster from Cook's lecture tour, a typed letter about a trip proposed to climb Mount Everest and a post card with Cooks Picture on front.

Frederick Albert Cook (June 10, 1865 – August 5, 1940) was an American Explorer, Physician, and ethnographer, noted for his claim of having reached the North Pole on April 21, 1908. This was a year before April 6, 1909, the date claimed by the American explorer Robert Peary, and the accounts were disputed for several years. His expedition did discover Meighan Island, the only discovery of an island in the American Artic by a United States expedition.

Description: This item comes with two very unusual ANSs (Autographed Note Signed), two pages on two adjoining sheets, 8.5 x 11, April 9, 1915. On one side, Cook pens a copy of the first telegram he sent after his polar discovery, in full: “Lerwick, Aug. 31, ’09, Marie F. Cook, 673 Bushwick Ave., Brooklyn N.Y. (U.S.A.). Successful and well, Fred.” On the adjoining page, Cook writes: “This was the first announcement of my attainment of the Pole. Frederick A. Cook. DeKalb, Apr. 9, 1915.” Accompanied by an advertisement for Cook’s lecture tour, a typed description of the lectures that mentions a future trip to climb Mount Everest, and a postcard photo.

Documentation: This item is fully documented by three sources. First it has a PSA/DNA Pre-Certified Authentication status. This is a service that was provided to RR Auctions and this item within. It means that this item has previously been reviewed by experts at PSA/DNA and is absolutely guaranteed to pass final testing and marking. Further It means that these signed ANSs(Autographed Note Signed) which they personally examined and is in their opinion authentic. Further they state that the signature(s) are consistent considering slant, flow, pen pressure, letter size and other characteristics that are typical of the other exemplars that they compared against. Pre-Certified PSA/DNA is to let buyers know beforehand that upon item being sent in for official final marking and certification that it is guaranteed to be authentic, in their opinion. Second, the item will come with a Certificate of Authenticity from the famous RR Auction where item was purchased by us originally. Third you will also get a Certificate from Reel Art. You will also get copies of invoice from RR Auction to further prove authenticity.