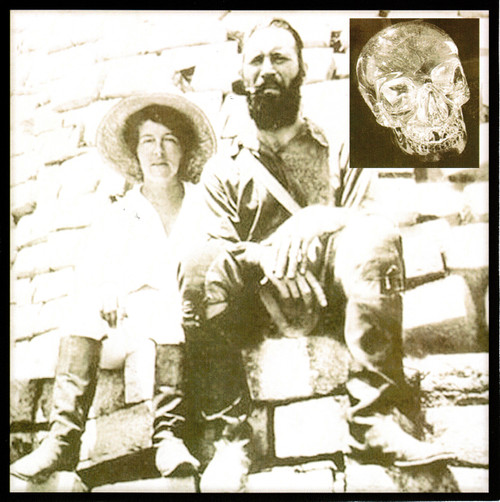 Description: English adventurer, traveler, and writer (1882-1959) known for his discovery of the legendary Crystal Skull. This is a fountain pen signature, F.A. Mitchell-Hedges 23/12/25, on an off-white album page, also signed by Lady RichmondBrown.  Also included is a 1925 TLS (Typed Letter Signed) by Lady Richmond Brown, who was a early woman explorer and traveling companion of Mitchell-Hedges.

Documentation: This item is fully documented by three sources. First it is PSA/DNA Authenticated. It's Certification number is Z04914 and item is visible there on their site. It states that this certificate authenticates the signed cut of F.A. Mitchell-Hedges which they personally examined. Further they state that the signature(s) are consistent considering slant, flow, pen pressure, letter size and other characteristics that are typical of the other exemplars that they compared against. The item also has been permanently marked with a invisible DNA daub that will fluoresce under a patented laser lamp. Second, the item will come with a Certificate of Authenticity from the famous RR Auction where item was purchased by us originally. Third you will also get a Certificate from Reel Art. You will also get copies of invoices from both RR Auction and PSA/DNA Authentications to further prove authenticity.

Also item does not come with Mitchell-Hedges Crystal Skull Reproduction as shown. But it is a option above, along with Mayan Jungle Plaque and Acrylic Box Case.