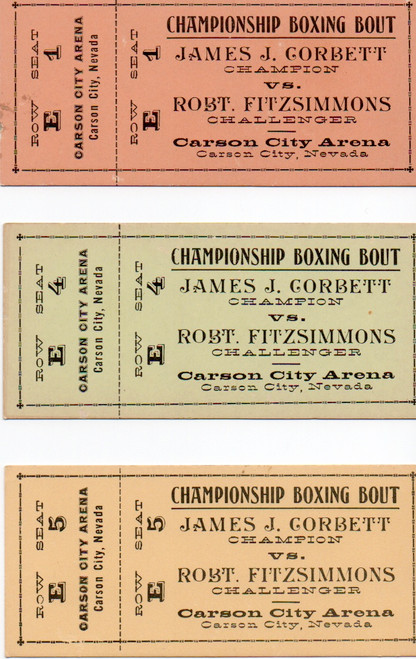 Gentleman Jim Corbett (Errol Flynn) is a Bare-Knuckles Boxer, who is determined to rise above his station. Jim and his friend, Walter Lowrie (Jack Carson) are befriended by Vicki Ware (Alexis Smith), whose father, Buck Ware (Minor Watson) runs the elegant Olympic Boxing Club. Ware, impressed by Jim, invites the fighter to become a member. Jim grows as a Boxer, but when his boasting estranges him from the club, he sets out to prove himself in a match against Boxing's reigning Champion.

From the film Gentleman Jim (1942) starring: Errol Flynn, these are three Real Prop Tickets to a Championship Bout between James J Corbett and Robt. Fitzsimmons. The Prop Tickets are printed on Yellowish type Card stock and are in Mint Condition. These Tickets were most likely made for film and were part of left overs that were not actually screen used. The Prop Tickets Measure 5 inches wide x 2.5 long.

There are three Real Prop Gentleman Jim Boxing Tickets available. This item is for one only.