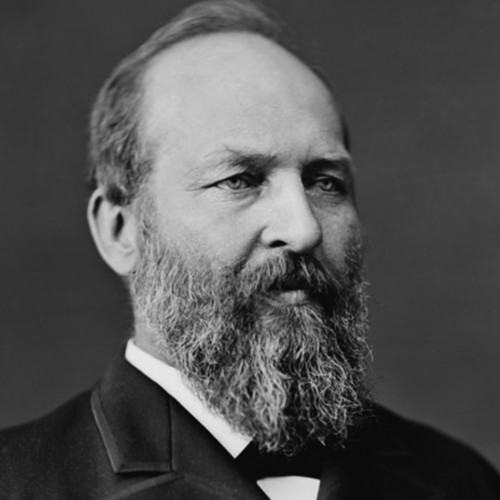 Garfield was shot by Charles Guiteau, a disgruntled office seeker, at the Baltimore and Potomac Railroad Station in Washington, D.C. on July 2, 1881. After eleven weeks of intensive and other care Garfield died.  Guiteau had followed various professions in his life, but in 1880 had determined to gain federal office by supporting what he expected would be the winning Republican ticket.  He composed a speech, "Garfield vs. Hancock", and got it printed by the Republican National Committee. One means of persuading the voters in that era was through orators expounding on the candidate's merits, but with the Republicans seeking more famous men, Guiteau received few opportunities to speak.  Guiteau, who considered himself a Stalwart, deemed his contribution to Garfield's victory sufficient to justify the position of consul in Paris, despite the fact he spoke no French, nor any foreign language

One of President Garfield's more wearying duties was seeing office seekers, and he saw Guiteau at least once. White House officials suggested to Guiteau that he approach Blaine, as the consulship was within the Department of State.  Blaine also saw the public regularly, and Guiteau became a regular at these sessions. Blaine, who had no intention of giving Guiteau a position he was unqualified for and had not earned, simply stated that the deadlock in the Senate over Robertson's nomination made it impossible to consider the Paris consulship, which required Senate confirmation.  Once the New York senators had resigned, and Robertson had been confirmed as Collector, Guiteau pressed his claim, and Blaine told him he would not receive the position.

Guiteau came to believe he had lost the position because he was a Stalwart. The office-seeker decided that the only way to end the internecine warfare in the Republican Party was for Garfield to die—though he had nothing personal against the president. Arthur's succession would restore peace, he felt, and lead to rewards for fellow Stalwarts, including Guiteau.

Guiteau concealed himself by the ladies waiting room at the Sixth Street Station of the Railroad, from where Garfield was scheduled to depart. Most of Garfield's cabinet planned to accompany him at least part of the way. Blaine, who was to remain in Washington, came to the station to see him off. The two men were deep in conversation and did not notice Guiteau before he took out his revolver and shot Garfield twice, once in the back and once in the arm. The time was 9:30 a.m. The assassin attempted to leave the station, but was quickly captured.  As Blaine recognized him and Guiteau made no secret of why he had shot Garfield, the assassin's motivation to benefit the Stalwarts reached many with the early news of the shooting, causing rage against that faction.

Garfield was hit by two shots; one glanced off his arm while the other pierced his back, shattering a rib and embedding itself in his abdomen. "My God, what is this?" he exclaimed.  Guiteau, as he was led away, stated, "I did it. I will go to jail for it. I am a Stalwart and Arthur will be President."

Among those at the station was Robert Todd Lincoln, who sixteen years before had watched his father die from an assassin's bullet. Garfield was taken on a mattress upstairs to a private office, where several doctors examined him, probing the wound with unwashed fingers. At his request, Garfield was taken back to the White House, and his wife, then in New Jersey, was sent for.  Blaine sent word to Vice President Arthur in New York City, who received threats against his life because of his animosity toward Garfield and Guiteau's statements.

The physician who took charge at the depot were soon probing the wound with unsterilized fingers and instruments. Garfield was given morphine for the pain, and asked Dr Bliss to frankly tell him his chances, which Bliss put at one in a hundred. "Well, Doctor, we'll take that chance." Garfield died a few days later.

Description: Three Letters (11 Actual Historical Pages in all) concerning the Assassination of President Garfield, including one by his Secretary of State, James G. Blaine, written the day before his death. First, an ALS (Autographed Signed Letter) signed “J. G. Blaine,” one page, April 18, [1881], in full: “Symptoms somewhat ameliorated at noon. No recurrence of chill.” The Two additional ALS (Autographed Signed Letter) letters are by Ziba Hazzard Potter, totaling ten pages, dated December 1881 and January 1882, and concern the trial of Charles Guiteau. The earlier letter, in part: “I attended for some hours the trial of Guiteau, the assassin. I met some of the experts for the Governments, and should I judge from their opinions I would regard Guiteau as entirely sane. But there is strong expert testimony on the other side and from it I should regard him as insane. The trial is one of the most remarkable in the history of governments and of state trials.” The later letter, in part: “Yesterday the trial of Guiteau was finished and resulted…in a verdict of murder in the first degree…I hope the result will be a lesson to assassins in both hemispheres.” Item also does come with Three complete transcripts typed of one for each item.

Documentation: This item is fully documented by three sources. First it has a PSA/DNA Pre-Certified Authentication status. This is a service that was provided to RR Auctions and this item within. It means that this item has previously been reviewed by experts at PSA/DNA and is absolutely guaranteed to pass final testing and marking. Further It means that these ALS (Autographed Signed Letters) concerning the assassination of President Garfield which they personally examined and is in their opinion authentic. Further they state that the signature(s) are consistent considering slant, flow, pen pressure, letter size and other characteristics that are typical of the other exemplars that they compared against. Pre-Certified PSA /DNA is to let buyers know beforehand that upon item being sent in for official final marking and certification that it is guaranteed to be authentic, in their opinion. Second, the item will come with a Certificate of Authenticity from the famous RR Auction where item was purchased by us originally. Third you will also get a Certificate from Reel Art. You will also get a copy of the invoice from RR Auction a to further prove authenticity.