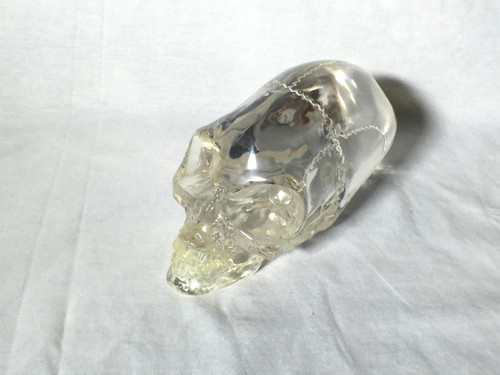 Famed Archaeologist and Adventurer Dr. Henry Indiana Jones is called back into Action when he becomes entangled in a Soviet Plot to uncover the Secret behind Mysterious Artifacts known as The Crystal Skulls.

The Crystal Skull of Akator was part of the remains of one of the thirteen interdimensional beings that ruled in the Temple of Akator. Around seven thousand years ago, thirteen interdimensional beings with Crystalline Skeletons from the "space between spaces" became the gods of the Ugha tribe and chose them to build a great city that the conquistadors called El Dorado, otherwise known as Akator.

This Collectable is part of our Special "Indiana Jones Collection." This is an Exclusive: Signed, Numbered, Limited Edition of Prop Replicas. This item is a Very Detailed Prop Replica of the Famous Crystal Skull of Akator as it was seen in the hit film:  "Indiana Jones and the Kingdom of the Crystal Skull (2008)" Starring: Harrison Ford. This Alien Skull is an Artists Rendering made Directly from various Drawings, Pictures and Specifications of the Real Prop Skull. Each item comes complete with a 4x6 Card that has Poster Art from film and also explains the Crystal Skull of Akator's part in the film.

The Alien Skull is made out of a Solid Crystal Clear Acrylic like material. It is very Heavy weighs 4 pounds and measures; 10 inches long x 4 inches wide x 5 inches tall.

The Circular Jungle Stand is available as an Option. It was designed with Inca, Aztec, Mayan, Pre-Columbian type Artwork applied. It is Antique Gray in Color, and Made out of Solid Resin, Weighs almost 5' pounds and Measures: 7" inches in Diameter x 1.5" inches thick. The Stand is Very Detailed and also Very Durable.

The Display Case is made out of High Quality Acrylic and measures: 11" Inches High X 9.5" Inches Wide X 9.5" inches Deep. Case has a nice slide lid on top that slides from back to front. Also inside case on Back Wall is a Secret Slot. This Slot is made to hold Photograph type paper. You will be provided a High Quality Full Color Print of Poster Art from Film, as shown in pictures. The Large Acrylic Box Case is available as an Option in the pull down menu.