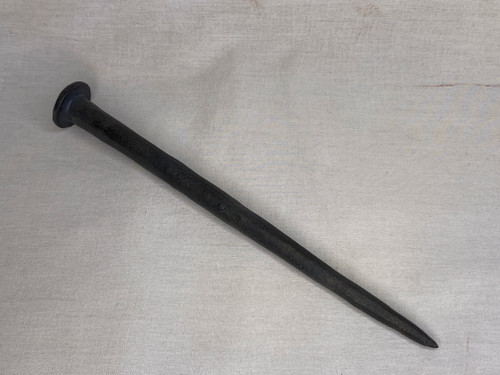 The Fourth Nail was an early Christian Artifact sought by Indiana Jones in 1936.

The Fourth Nail was said to be stolen by Gypsies before the crucifixion of Jesus Christ. According to legend, the First and Second Nails were for Jesus' hands, and the Third was for His feet. The Fourth was meant to deliver the fatal blow to His heart, but an unwitting Gypsy stole the nail and instead used it to repair his wagon. The Gypsies believed that in return for stealing the item that would have brought instant death upon His son, God would protect their people and forgive them of their petty crimes.

In the early twentieth century, many believed the Nail to be near Bucharest, in the possession of a Gypsy clan descended from the original thief.

In 1936, Indy and Marion Ravenwood tracked the Nail to the mountains west of Barcelona, where it had been cared for by a Gypsy elder, a woman known as the Phuri Dai. Unfortunately, Ben Ali Ayoob's henchmen arrived soon after and attempted to steal the Nail from the Gypsy; but when the Relic was touched, the would-be thieves succumbed to Mysterious Stab Wounds through their Hearts. Having witnessed the Nail's power, Indy decided to leave it with the Phuri Dai.

This item appeared in the Comic: The Further Adventures of Indiana Jones – "The Fourth Nail”

This Collectable is part of our Special "Indiana Jones Collection." This is an Exclusive: Signed, Numbered, Limited Edition of Prop Replicas. This item is an Artists Rendering made from Artwork directly from original Artwork. Each item comes complete with a 4x6 Card that has Cover Art from the Comic and also explains the Fourth Nail's part in the story.

This item is made out of solid durable Resin and painted Bronze with some Gold antiquing to make look like a Roman Nail. It measures:7 inches x .75 inch at head which tapers toward the point.