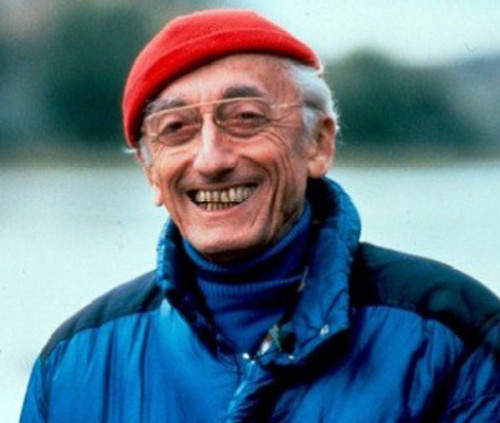 This is a Autograph Signature of Explorer Jacques Cousteau. Item also includes picture of Cousteau to use in framing.

Jacques-Yves Cousteau commonly known in English as Jacques Cousteau; 11 June 1910 – 25 June 1997) was a French naval officer, explorer, conservationist, filmmaker, innovator, scientist, photographer, author and researcher who studied the sea and all forms of life in water. He co-developed the Aqua-Lung, pioneered marine conservation and was a member of the Academie francaise.

Cousteau described his underwater world research in a series of books, perhaps the most successful being his first book, The Silent World: A Story of Undersea Discovery and Adventure, published in 1953. Cousteau also directed films, most notably the documentary adaptation of the book, The Silent World, which won a Palme d'or at the 1956 Cannes Film Festival. He remained the only person to win a Palme d'Or for a documentary film, until Michael Moore won the award in 2004 for Fahrenheit 9/11.

Description: This item is a Autograph signed J.Y. Cousteau underlined on the back of 7.5 x 3 Boarding Pass card.

Condition: Overall in very good condition. There is a fold going through the signature.

Documentation: This item is fully documented by three sources. First it has a PSA/DNA Pre-Certified Authentication status. This is a service that was provided to RR Auctions and this item within. It means that this item has previously been reviewed by experts at PSA/DNA and is absolutely guaranteed to pass final testing and marking. Further It means that this signed card of Jacques Cousteau which they personally examined and is in their opinion authentic. Further they state that the signature(s) are consistent considering slant, flow, pen pressure, letter size and other characteristics that are typical of the other exemplars that they compared against. Pre-Certified PSA /DNA is to let buyers know beforehand that upon item being sent in for official final marking and certification that it is guaranteed to be authentic, in their opinion. Second, the item will come with a Certificate of Authenticity from the famous RR Auction where item was purchased by us originally. Third you will also get a Certificate from Reel Art. You will also get a copy of the invoice from RR Auction a to further prove authenticity.

Picture of Cousteau as shown does come with item.