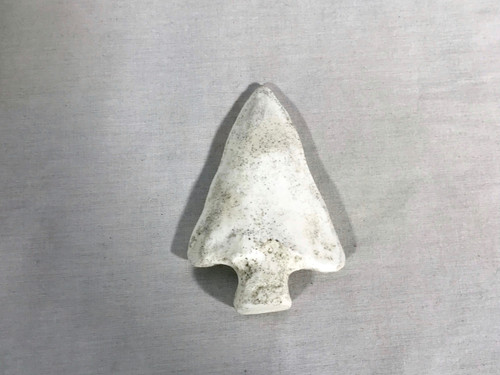 When a Gigantic Great White Shark begins to menace the small island community of Amity, a Police Chief, a Marine Scientist and Grizzled Fisherman set out to stop it.

This is a Signed, Numbered Limited Edition of the Famous Jaws Bruce Shark Tooth as it was seen in the Classic Film Jaws (1975) starring Roy Scheider, Robert Shaw. Richard Dreyfuss and Directed by Steven Spielberg. This High Quality Movie Prop Replica Jaws Bruce Shark Tooth was actually Cast from an Original Mold that was taken off a Real Prop that was on the Mechanical Shark as seen in the Film. The Shark was named Bruce by the Crew members and had several Teeth made for it. They would replace Teeth as needed after Scenes were shot and other Teeth broke off.

Each item comes complete with a Double Sided 4 x 6 Card that has Poster Art from film and explains the Bruce Shark Tooth's use in the movie. The Card is Signed and Numbered on the Reverse. The Jaws Bruce Shark Tooth comes in a Blue Velvet like Bag.

The Movie Prop Replica Jaws Bruce Sharks Tooth is White in Color, Aged and is made out of Solid Resin. It measures; 3 inches tall x 2 inches wide at the base x .5 inches thick

The Replica Jaws Bruce Tooth does not come with Acrylic Display Plaque as shown in picture. It is available as a option in pull down menu.

The Display Plaque is High Quality, Magnetic Sealing, 4x6x1 inch, Acrylic item. It is perfect for your 4 x 6 Signed Collectors Card to fit in showing Poster Art from Film. This also comes with a Solid 2x2x1 inch Acrylic Item Stand to set Jaws Tooth on for Display.