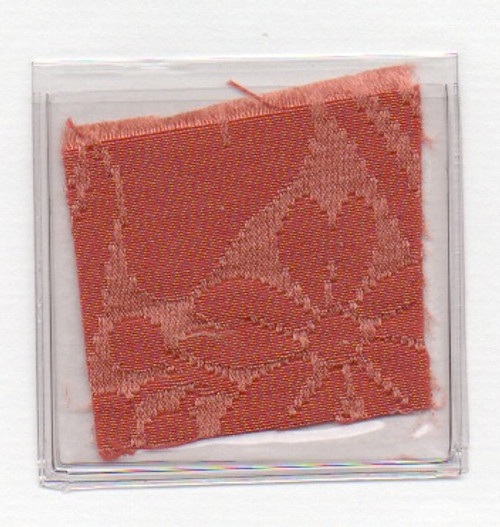 Kennedy Administration, White House Fabric from the Era of Camelot.

This item is a lovely piece of Salmon Colored Fabric which was used on several love seats in the sitting room of the White House during President Kennedy's Administration, The piece measures: 1.5 inches x 2 inches and was placed in a plastic sleeve, which is adhered to a signed document by the White House upholster, Lawrence Arata, stating its provenance. The Fabric is in Near Mint Condition. This item is directly from the famous collection of Father Ron Hoskins, Assassinologist.

In 1961, First Lady Jacqueline Kennedy, who had decided shortly after her husband took office to redecorate and restore the White House, brought Mr. Lawrence Arata to Washington from Hyannis on Cape Cod, where he had a small upholstery business. He had established a reputation among the wealthy on the Cape as a highly-skilled artisan who did upholstery in the correct old-fashioned way. At the White House, he was given living quarters on the third floor. He also took his meals in the Executive Mansion. He continued to live there for two years.

The item was purchased by Reel Art at a University Archives auction of the estate of Father Ronald Hoskins (1949-2020), the noted assassinologist. Father Ron was best known for his massive collection of John F. Kennedy memorabilia.

This item Was also authenticated by John Reznikoff, owner of University Archives and comes with a Letter of Authenticity from him. John Reznikoff is a Premier Authenticator for both major 3rd party authentication services: PSA and JSA as well as numerous famous auction houses.

Professional Sports Authenticator (PSA) is the largest and most trusted third-party trading card authentication and grading company in the world.

James Spence Authentications (JSA) is one of the Foremost Autograph authentication companies in the world.

So you will get the Piece of Fabric, in a Plastic Sleeve and adhered to a Letter of Authenticity signed from Lawrence Arata, The Official White House Upholsterer at the time. This also contains a Color Picture of the Love Seats inside the Sitting Room at the White House. You will also get a Letter of Authenticity from University Archives signed by John Reznikoff and the Auction sheet for item that contains a full summary and description of item.