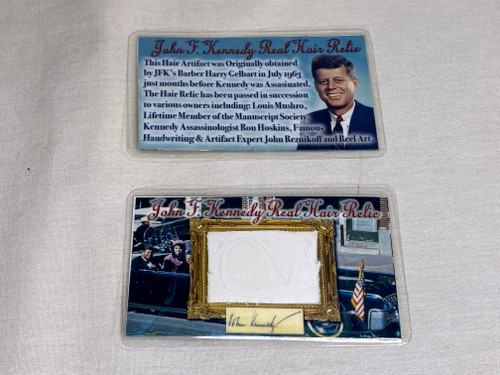 Provenance: This Artifact was originally procured by Kennedy’s Personal Barber “Harry Gelbart.” The Hair was then passed down through generations and into the hands of various individuals. In Succession these people were: Harry Gelbart< Louis Mushro< Father Ronald Hoskins< John Reznikoff/ University Archives< Reel Art

Condition: The Hair Lock remains in an Excellent Historical Museum State. Pieces of the Hair Relic have been separated and each placed in an Archival Safe, Sealed Acid Free Bag then sealed inside a Laminated Hair Relenquary for extra protection.

The Laminated Card itself is the size of a Business Card with artwork on both sides. Side A shows a Picture of President Kennedy and also explains a brief history of the Object. Side B shows a Photo of the Famous Zapruder Film and alsoincludes a copy of his Original Signature that was originally authenticated by Charles Hamilton. In the middle of Side B is a Gold Period Style Frame. The inside of the frame has been cut out to Reveal the Hair Artifact within its Archival Bag

The color of President John F. Kennedy, Sr’s hair was a “Reddish-Brown” Color. He was starting to get some gray in his hair at the time this Original Hair Lock was obtained.

This Hair Artifact was originally acquired by Kennedy’s personal Barber Harry Gelbart. He was asked to cut the President’s Hair at Peter Lawford’s Beach House in Santa Monica, California in July of 1963. This was just months before Kennedy’s Assasination. Actor Peter Lawford was the Brother-in-Law of the President at this time. After he was finished Lawford’s manager Milt Ebbins suggested that Harry collect the cut Hair and save as a Momento.

Harry Gelbart was a Professional Barber since 1919. He first Apprenticed as a boy in his native Latvia at the age of twelve. He had entertained many clients from all walks of life, from the Underworld (Bugsy Siegal, Mickey Cohen and even Jack Ruby), to Sporting Figures (Barney Ross, Max Baer), to Members of the Press (Walter Winchell) and to what was once the cream of the Entertainment Industry (Charlie Chaplin, David O’Selznick, William S. Paley, Gregory Peck, Kirk Douglas, Jascha Heifetz, and literally dozens more). Gelbart stated: “It was cutting the hair of John F. Kennedy that has given me the most pleasure, certainly the most personal and professional pride.”

Harry was first introduced to Kennedy when he was a senator by another one of his clients actor Peter Lawford. He would bring his bag of tools to Lawford’s residence to attend to the grooming of Senator and later President Kennedy in these private, relaxed surroundings.

President Kennedy’s Barber Harry Gelbart eventually sold the Hair Heirloom Lot to Louis Mushro. Gelbart provided a Letter of Authenticity and both items were also notarized by Notary Sharon Perez of Los Angeles, California on October 2, 1995. Gelbart was also featured in a Los Angeles news article. Copies of the original documents are provided including: 1. Letter From Personal Barber Harry Gelbart, 2. A Notorized Document by Harry GelBart and Notary Sharon Perez, 3. Newspaper Article about Harry Gelbart the Kennedy's Barber going to his Presidential Inauguration.

Louis Mushro is considered to be one of the Experts in the field of Hair Artifacts. Upon receipt of the Hair Locks Louis examined  them under a Spectrograph and compared the Relics to other Kennedy samples in his collection. He deemed that these examples were indeed Authentic.

It was at this time that he separated some of the Hair from the original Item purchased. He then framed some and also sold some other Hair Locks separately. Copies of Louis Mushro’s original authentications documents are provided including: Letter From Louis Mushro about his obtaining Hair from Barber Harry Gelbart, 2. Certificate of Authenticity by Mushro about this item, 3. Another Different Letter of Authenticity by Mushro about this item, 4. Mushro's certificate from the Manuscript Society.

Noted Assassinologist Father Ronald Hoskins (1949-2020) aquired the Hair from Louis Mushro. He added it to his extensive Kennedy collection. Father Ron was best known for his massive collection of John F. Kennedy memorabilia, but he collected so much more than that. His collecting philosophy was simple: follow the line of inquiry wherever it leads. In this way, his collection extended logically from John F. Kennedy to Lee Harvey Oswald to Jack Ruby and other players. Expanding outward and outward in ever-widening circles, the collection encompassed everything that was related, even to the smallest degree, to the Kennedys, the assassinations of John and Robert, and the greater historical context. The result? An impressive collection of incalculable value, ranging from autographed letters, apparel, and photographs, to ephemera, coins, press typescripts, Hair Relics and even Marguerite Oswald’s driver’s license.

After his death his estate released several Kennedy related Artifacts including the Hair Relics to John Reznikoff to sell in an auction.

John Reznikoff, is the owner and operator of the largest Historical and Famous Hair, Documents and Relics company called University Archives. John Reznikoff is listed in the: Guinness Book Of World Records for having the largest Hair Collection in the World. He is also a well known Authenticator for PSA/DNA and has also been used as a Consultant with the police and various government agencies.

After obtaining from the Hoskins estate, Reznikoff Completely Authenticated all of the items that were to be sold in an upcoming Universal Archives auction, including the Hair Samples. He compared them with other Kennedy Hair Pieces that were already in his Extensive Collection by using a Microscope and Spectroscope and deemed them to be Authentic. A copy of his letter of Authenticity Is included.

At Reel Art the Hair Relics were separated and each Hair was placed in its own Archival Safe, Sealed Acid Free Bag. Then the Artifact Bag was Sealed inside a Laminated Hair Relenquary for additional protection. The Laminated Card can be opened if wished as the Artifact within is still contained in its original Historical Museum State separate from the Card. The Laminated Card itself is the size of a standard Business Card with artwork on both sides. Side A shows a Picture of John F. Kennedy and also explains a brief history of the Object. Side B shows a photo of Kennedy from the famous Zapruder film and also includes a copy of his original Signature that was originally authenticated by Charles Hamilton. In the middle of Side B is a Gold period style frame. The inside of the frame has been cut out to reveal the Hair Relic within its Archival Bag.