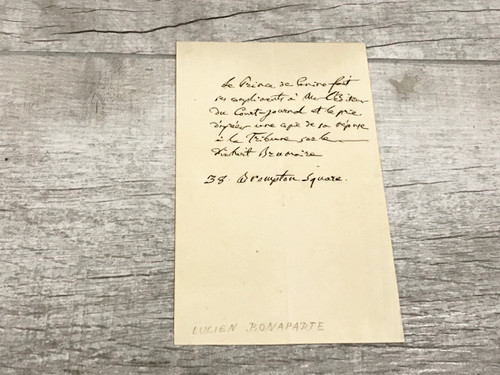 Lucien Bonaparte, Prince Français, 1st Prince of Canino and Musignano (born Luciano Buonaparte; 21 May 1775 – 29 June 1840), was a French statesman, who served as the final President of the Council of Five Hundred at the end of the French Revolution. Lucien was the younger brother of Napoleon (1775–1840) who served in various official capacities.

Description: Authored Letter Signed in French, one page, 4.25 x 7, no date but circa 1835. In full (translated): “The Prince of Canino makes his compliments to Mr. Editor of the Court-Journal and begs him to accept a copy of his response to the Tribune on the eighteenth Brumaire.” In fine condition. In 1835, Bonaparte published Résponse de Lucien Bonaparte Prince de Canino aux Mémoires du Général Lamarque, for which an advertisement appeared in an April 25, 1835, issue of the Court Journal. The eighteenth Brumaire was the coup d’etat by which Napoleon overthrew the French Directory in 1799.