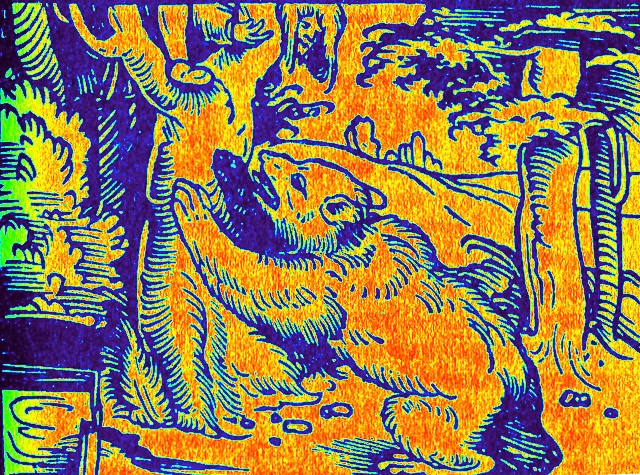 You kill the bear, eat the bear meat, and then put on the bearskin. The power of the bear shirt—orber serkr in Old Norse—gives you the strength and fury of the great animal. This is what berserkmeans, "bear shirt." Do you actually turn into a bear-human hybrid? Maybe. Nobody liked to go to war against the berserkers, that much is known from the stories of the Roman Empire's long border conflict with the barbarians, which means not "bear brains" but "foreigners."

The human-bear combination exists in North American and Siberian tribal religions, too. These stories go back to the Bear Sons, born to an animal-god father and human mother. When the mother dies, the Bear Sons leave the human tribe and return to the Bear People. Beorn, the werebear friend of Gandalf in The Hobbit, is of this lineage, too. The same basic mythology is in the tale of Callisto and Arcas, the bear mother and son of Ancient Greece. Much later, American forestry managers accurately predicted most people didn't know that wildfires are generally caused by lightning. Perhaps Americans could be trained to be extra careful with matches and motors while out of doors, in range of public land full of trees that could be sold to make Dixie Cups and Bounty paper towels. And so a thousand billboards were put up, featuring a humanized bear, its tight Levis straining over its bulging bear crotch, telling Americans a huge lie about fire.

Something is happening, has been happening, and it's about when one person and one bear love each other very much. Sex + magic animal-person hybrid = Why isn't anybody making a supernatural teen franchise out of this? What is more romantic than a thousand-pound bear with fangs full of salmon intestines, all humping upon a nubile sophomore who really isn't so different than any other high-school girl who has utterly turned her back on God and decency?

People wear costumes at Halloween because they get magic power from wearing costumes and then become these other identities, if only for the night. If the California Grizzly had not been hunted to extinction a hundred years ago, you could go into the Sierra Nevada mountains or even the wetlands of Santa Monica and try to kill one of these majestic giants, wear its skin, and maybe become a werebear. The grizzly is the preferred bear for this kind of work. But you cannot do this; the grizzlies are all dead throughout the continental United States except for a northern range between the Cascades and the Rockies. Lewis and Clark claimed there were once 50,000 grizzlies between Hudson Bay and the West Coast.

Still, a common suburban New Jersey bear eating pizza crusts out of the garbage remains more impressive than most humans. You could become a black bear werebear. It might be better for cities, anyway, the way that coyotes do better in cities than wolves. Oh sure, everyone is excited about a werewolf, but coyotes have not only survived all barbaric human attempts to eradicate them, coyotes have also thrived. The coyote might be more compelling than the wolf. And more realistic in an urban or suburban setting, too. The Dire Wolf vanished thousands of years ago, the regular wolf was nearly hunted to extinction in the past century, and coyotes are everywhere. They're in Chicago, they're in Central Park. A werewolf has two things going against it: it's a lycanthropic monster, and also it's a big scary wolf. A were-coyote could pass almost unnoticed on the streets of any American or Canadian town. Nobody would run out for silver bullets—it's just a coyote! You can get more cats at the shelter.

The best human night of your life wouldn't be half as exciting as a few hours of pack hunting Golden Gate Park with your coyote friends. But this is not about the were-coyote, not today. Today is about the werebear.

It's a pity that so few fantasy authors have found the werebear inspiring.
—From a web page about werebears

There are weaknesses to being a were-bear, social and inherent. Some of the social weaknesses are the distrusting nature of those around you, your different, and you’re going to have to show them who you really are. There are also certain personality traits that come along with this species. They are generally somewhat irrational when it comes to goals, they will do what it takes, whether or not death is required. Were-bears are also somewhat impulsive ….
—From the "*OFFICIAL* blogs of Ruben YoungBear Pandy, the world's most talented new entertainer of all time."

The werebear has few constraints, other than the already depleted wild habitat of large brown bears. A full moon means nothing to this creature. Besides, the moon is always full. A werebear is smart enough to know this. Silver bullets? Meaningless. Religious symbols? The werebear honestly doesn't care. It's not against your religion, it's just not going to fall over dead because you have some holy water or crosses or a bracelet from the Kabbalah Centre.

The werebear's great weakness is its love of salmon and honey. A nickname for the bear in Old English was "bee wolf," because of its insatiable love of honey. So Beowulf means the same thing: bear. (In Russian, as well as many Slavic tongues, the word for bear is "honey eater," or medved.)

Fresh wild salmon requires wild bear habitat: free-flowing rivers, forests, oceans, clean water, no dams or clear-cutting or outlet malls. But the werebear can adapt, too. Like Barack Obama on the Midwestern campaign trail, the werebear soon learns he can always order salmon and vegetables ("with a side of honey") at Applebee's or Coco's. The werebear can survive, in this bland modern world.

Arctic werebears, for example, could use their rage against humanity for screwing up the climate and making the North Pole melt. Imagine a dozen white osos bursting through the (revolving?) doors of Exxon Mobil's stately headquarters, taking the executive elevator to the top, and using their monstrous claws and teeth to remove the heads of the CEO and CTO and president of the board, then throwing the heads down through the atrium, 50 stories straight down, and then all the workers in the lobby cheer "hooray for the werebears," and the bears walk down whatever New York street we use for this. (Exxon Mobil is actually headquartered in "Irving, Texas," but that's okay because we'll call it something slightly different, like "MobEx OilCorp.")

The receptionist sees it all. She actually buzzed the bears inside. Her name is Bernadetta, which also means "bearlike," and she is not just in like but in love with the main bear, "Arktos." (The word arcticmeans "near the bear," because the North Pole is "near" the constellation Ursa Major and Ursa Minorwith its North Star. Young readers will appreciate this, if they ever learn anything in high school or college. All of these "Art" names, including Arthur of King Arthur fame, come from the word for bear. "Orson," "Ursula," "Bjorn," "Osbourne," these names also mean bear.) Arktos is waiting for her, waiting with some frozen salmon he liberated from the dumpster behind Guy Fieri's restaurant in Times Square.