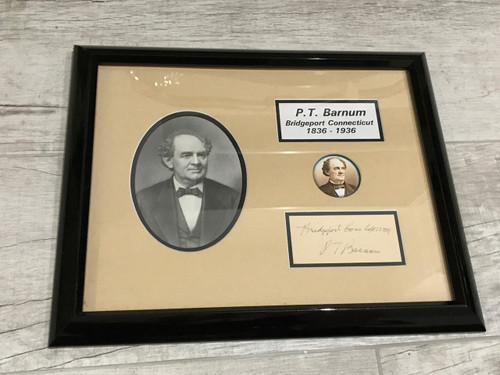 Phineas Taylor Barnum (July 5, 1810 – April 7, 1891) was an American showman, politician and businessman remembered for promoting celebrated hoaxes and for founding the Barnum & Bailey Circus (1871–2017).  Although Barnum was also an author, publisher, philanthropist, and for some time a politician, he said of himself, "I am a showman by profession...and all the gilding shall make nothing else of me," and his personal aim was "to put money in his own coffers." Barnum is widely, but erroneously, credited with coining the phrase "There's a sucker born every minute."

Condition: It is in Fine Condition

Documentation: This item is fully documented by three sources. First it has a PSA/DNA Pre-Certified Authentication status. This is a service that was provided to RR Auctions and this item within. It means that this item has previously been reviewed by experts at PSA/DNA and is absolutely guaranteed to pass final testing and marking. Further It means that this signature of P.T. Barnum which they personally examined and is in their opinion authentic. Further they state that the signature(s) are consistent considering slant, flow, pen pressure, letter size and other characteristics that are typical of the other exemplars that they compared against. Pre-Certified PSA /DNA is to let buyers know beforehand that upon item being sent in for official final marking and certification that it is guaranteed to be authentic, in their opinion. Second, the item will come with a Certificate of Authenticity from the famous RR Auction where item was purchased by us originally. Third you will also get a Certificate from Reel Art. You will also get a copy of the invoice from RR Auction a to further prove authenticity.