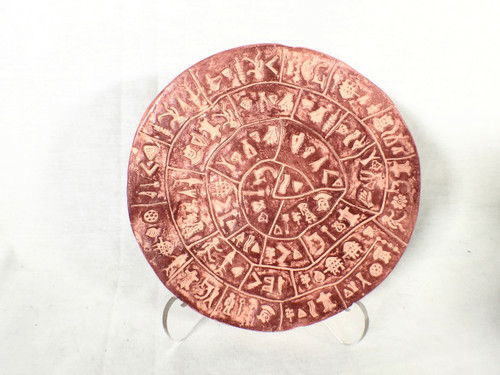 This is a Signed, Numbered, Limited Edition Ancient Mystery Replica of the Phaistos Disc. It Is a Very Detailed Professionally made copy that appears just as the Original does. It is made from an Artists Rendering that was Created using various Photographs from Books and taken at the Museum where it sits as examples. The Disc is Covered on both sides with a Spiral of Stamped Ancient Minoan Type Symbols. Each Phaistos Disc Replica comes complete with a Signed, Numbered Certificate Authenticating the item.

The Phaistos Disc Replica is Red Clay in color and made out of a Very Durable Solid Resin. It measures about 6 inches in diameter x .75 inches thick. It weighs about 2lbs and comes with a clear easel stand to set in for Display. This Easel is very unique as it can be either set on a counter or mounted on wall for ease of displaying the object.

The Phaistos Disc also comes with a Signed Free Copy of our Full Color, 36 page Book The Phaistos Disc by James Arnold. It has sections on Attempts to Decipher the Disc, the Discovery of it and More. The Book includes explains the basic history of the Artifact to the 21st century. Book also includes various Historical Newspaper Articles as they have appeared through History and Actual Historical Photos of the Real Phaistos Disc.

The Jungle Stand does Not come with this item. It is available in the pull down menu above. The Stand, is Resin and was designed with Aztec, Inca, Mayan, Pre-Columbian type Artwork applied.  It is painted Antique Gray, made out of a very durable Poly Resin, Weighs almost 3Lbs  and Measures: 6.25 inches in Diameter x 1 inch thick. The Display Plaque is very detailed and also very durable.

The Phaistos Disc does not come with Display Case as shown. It is available as a option,in pull down menu above. The Display Case is made out of High Quality Acrylic and measures: 11 Inches High X 9.5 Inches Wide X 9.5 inches Deep. Case has a nice slide lid on top that slides from back to front. Also inside case on back wall is a Secret Slot. This slot is made to hold Photograph type 8.5 x 11 paper. You can put the information sheet or Newspaper article that comes with item.