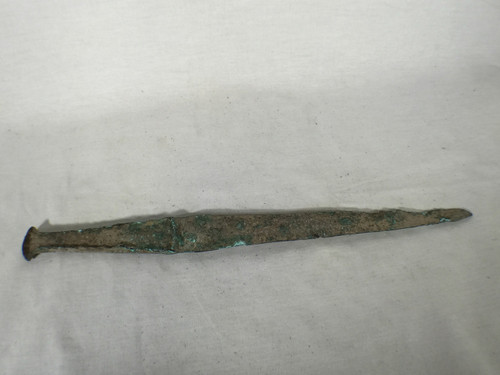 This is a Real Rare Luristan / Persian Bronze Flanged Dagger,  ca. 1000 to 650 BCE.  This is a flanged cast bronze dagger that at one time would have had a handle made of wood, stone, or bone.  It has a bright blue-green patina.  Luristan, in modern day northwestern Iran, was in a relatively crowded area in the Bronze Age, near the competing interests of the Babylonians and the Elamites.  The mountain tribesmen of Luristan served as mercenaries for both of these powers and many of them were buried alongside daggers like these.

The Dagger Measures: 14.4 inches long x 1.3 inches wide x .5 inch thick at handle. It weighs about 2 pounds and is in excellent condition. Condition means that this knife has the typical condition of a object having normal wear and tear from the time period it is from.

This item is from the EX-Estate of John Piscopo. Mr. Piscopo was one of the largest collectors of ancient weapons in the US with a collection that spanned all cultures, all ages.

Luristan Bronze is defined as small cast objects from the Early Iron Age which have been found in large numbers in Lorestan Province and Kermanshah in west-central Iran.  They include a great number of ornaments, tools, weapons, horse-fittings and a smaller number of vessels including situlae, and those found in recorded excavations are generally found in burials. The ethnicity of the people who created them remains unclear, though they may well have been Persian, possibly related to the modern Lur people who have given their name to the area. They probably date to between about 1000 and 650 BC

The bronzes tend to be flat and use openwork, like the related metalwork of Scythian art. They represent the art of a nomadic or transhumant people, for whom all possessions needed to be light and portable, and necessary objects such as weapons, finials (perhaps for tent-poles), horse-harness fittings, pins, cups and small fittings are highly decorated over their small surface area. Representations of animals are common, especially goats or sheep with large horns, and the forms and styles are distinctive and inventive. The "Master of Animals"  motif, showing a human positioned between and grasping two confronted animals is common but typically highly stylized. Some female "mistress of animals" are seen.