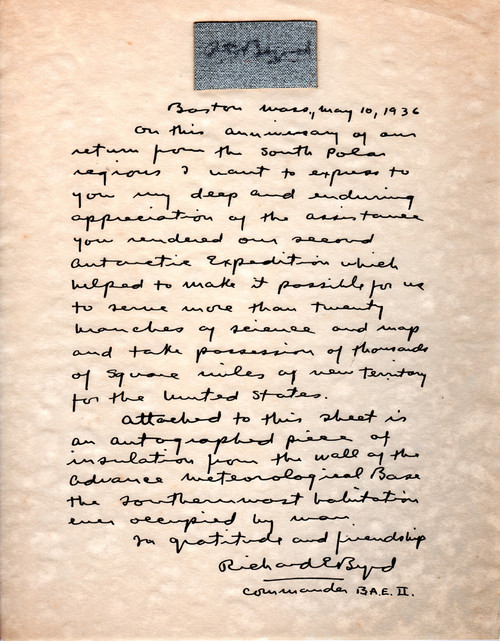 This is a very rare item indeed, it is a Swatch of Insulation from the interior wall of Byrd's Advance Meteorological Antarctic Base signed by Richard Byrd. It is also attached to a WLS (Written Letter Signed) by Byrd stating that it is from the Southernmost Habitation ever occupied by man!

Description: It is a Very Rare 2 x 1 Inch Swatch of Insulation from the Interior Wall of Byrd's Advance Meteorological Antarctic Base. The Swatch is signed in black ink, R.E. Byrd. The Antarctic Meteorological Base Piece is affixed to a 8.5 x 11 inch presentation sheet, bearing a printed message and another signature of Byrd, dated May 10, 1936.  Message reads, in part: I want to express to you my deep and enduring appreciation of the assistance you rendered our second Antarctic Expedition...attached to this sheet is an autographed piece of insulation from the wall of the Advance Meteorological Base, the southernmost habitation ever occupied by man.

Condition: Signature on swatch is noticeably faded, but still legible, otherwise fine condition. The signature and printing on sheet is in excellent condition.

Documentation: This item is fully documented by three sources. First it is PSA/DNA Authenticated. It's Certification number is Z04913 and item is visible there on their site. It states that this certificate authenticates the signed Insulation Swatch and Presentation Sheet which they personally examined. Further they state that the signature(s) are consistent considering slant, flow, pen pressure, letter size and other characteristics that are typical of the other exemplars that they compared against. The item also has been permanently marked with a invisible DNA daub that will fluoresce under a patented laser lamp. Second, the item will come with a Certificate of Authenticity from the famous RR Auction where item was purchased by us originally. Third you will also get a Certificate from Reel Art. You will also get copies of invoices from both RR Auction and PSA/DNA Authentications to further prove authenticity.