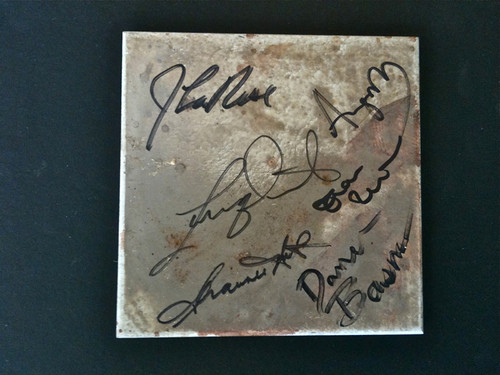 Jigsaw kidnaps a doctor to keep him alive while he watches his new apprentice put an unlucky citizen through a brutal test.

From the Horror Film "Saw III" (2006) starring: Tobin Bell and Shawnee Smith, This is a Real Prop Autographed Bathroom Tile from the film. Each tile is Autographed by the main characters in the film; Tobin Bell, Shawnee Smith, Angus Macfadyen, Bahar Soomekth and Donnie Wahlberg. All Signatures were signed in person and the tiles are also numbered on the back as they were limited to 30. There are two Tiles available here one is 8/30 the other 13/30. You get your choice of one. Tile is a standard bathroom tile and measures: 6 inches wide by 6 inches long x .25 deep.

The Prop Bloody Bathroom Tiles and Autographs were obtained directly from Production Studio "Twisted Pictures" that made the film. The Tiles are in in execellent Screen Used condition. Tile comes complete with Letter of Authenticity signed by Producers of film Mark Burg and Oren Koules.
×