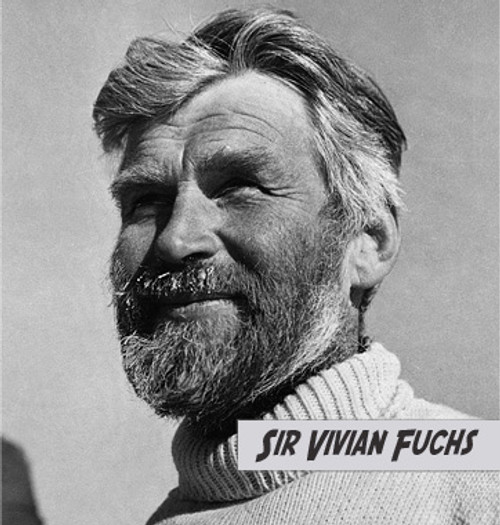 Fuchs is best known as the leader of the Commonwealth Trans-Antarctic Expedition, a Commonwealth-sponsored expedition that completed the first overland crossing of Antactica. Planning for the expedition began in 1953, and envisioned the use of Sno-Cat tractors to cross the continent in 100 days, starting at the Weddell Sea, ending at the Ross Sea, and crossing the South Pole.

Fuchs and his party arrived in Antarctica in January 1957 after camp had been set up. The party departed from Shackleton Base on 24 November 1957. During the trek, a variety of scientific data were collected from seismic soundings and gravimetric readings. Scientists established the thickness of ice at the pole, and the existence of a land mass beneath the ice. On 2 March 1958, Fuchs and company completed the 100-day trip by reaching Scott Base, having travelled 2,158 miles.

In 1958, he was Knighted by Queen Elizabeth II. He co-wrote, with Sir Edmund Hillary, The Crossing of Antarctica. In 1959 he was awarded the Hans Egede Medal by the Royal Danish Geographical Society

Description: This item is a Autograph signed Vivian Fuchs underlined 1989 on a off-white 6 x 4 inch card.

Documentation: This item is fully documented by three sources. First it has a PSA/DNA Pre-Certified Authentication status. This is a service that was provided to RR Auctions and this item within. It means that this item has previously been reviewed by experts at PSA/DNA and is absolutely guaranteed to pass final testing and marking. Further It means that this signed card of Sir Vivian Fuchs which they personally examined and is in their opinion authentic. Further they state that the signature(s) are consistent considering slant, flow, pen pressure, letter size and other characteristics that are typical of the other exemplars that they compared against. Pre-Certified PSA /DNA is to let buyers know beforehand that upon item being sent in for official final marking and certification that it is guaranteed to be authentic, in their opinion. Second, the item will come with a Certificate of Authenticity from the famous RR Auction where item was purchased by us originally. Third you will also get a Certificate from Reel Art. You will also get a copy of invoice from RR Auction to further prove authenticity.

Picture of Fuchs as shown does come with item.