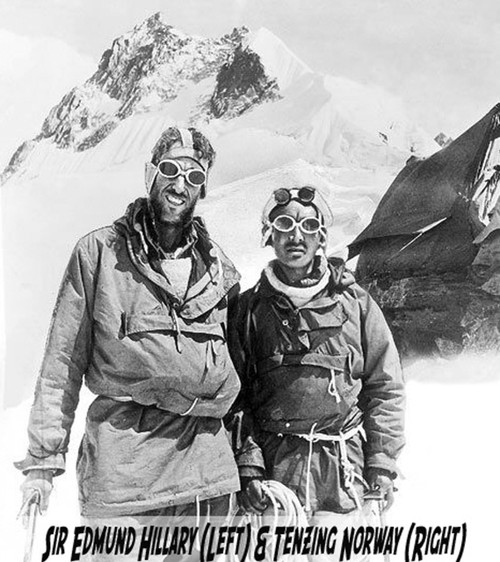 This is a Ink signature Card of famed Explorer Sir Edmund Hillary. You will also get Black and White picture of Hillary to use in framing.

Sir Edmund Percival "Ed" Hillary (20 July 1919 – 11 January 2008) was a New Zealand mountaineer, explorer, and philanthropist. On 29 May 1953, Hillary and Nepalese Sherpa mountaineer Tenzing Norway  became the first climbers confirmed to have reached the summit of Mount Everest. They were part of the ninth British expedition to Everest, led by John Hunt.  TIME magazine named Hillary one of the 100 most influential people of the 20th century.

Hillary became interested in mountaineering while in secondary school. He made his first major climb in 1939, reaching the summit of Mount Oliver. He served in the Royal New Zealand Air Force as a navigator during World War II. Prior to the 1953 Everest expedition, Hillary had been part of the British reconnaissance expedition to the mountain in 1951 as well as an unsuccessful attempt to climb Cho Oyu in 1952. As part of the Commonwealth Trans-Antarctic Expedition he reached the South Pole overland in 1958. He subsequently reached the North Pole, making him the first person to reach both poles and summit Everest.

Description: This item is a Autograph signed E.P. Hillary on a off-white 4 x 5.5 inch card.

Condition: Overall in very good condition. There is some scattered soiling.

Documentation: This item is fully documented by three sources. First it has a PSA/DNA Pre-Certified Authentication status. This is a service that was provided to RR Auctions and this item within. It means that this item has previously been reviewed by experts at PSA/DNA and is absolutely guaranteed to pass final testing and marking. Further It means that this signed card of Sir Edmund Hillary which they personally examined and is in their opinion authentic. Further they state that the signature(s) are consistent considering slant, flow, pen pressure, letter size and other characteristics that are typical of the other exemplars that they compared against. Pre-Certified PSA /DNA is to let buyers know beforehand that upon item being sent in for official final marking and certification that it is guaranteed to be authentic, in their opinion. Second, the item will come with a Certificate of Authenticity from the famous RR Auction where item was purchased by us originally. Third you will also get a Certificate from Reel Art. You will also get a copy of the invoice from RR Auction a to further prove authenticity.

Picture of Hillary as shown does come with item.