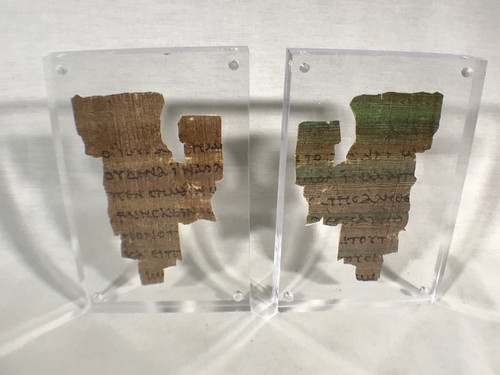 This item is for a Numbered, Signed, Limited Edition Replica of the Oldest Piece of the New Testament called The St. John Fragment or Papyrus 52.

The St. John Fragment or Papyrus 52 is a piece from a Papyrus Codex and is the Oldest Fragment from the New Testament known to Survive. It measures only 3.5 by 2.5 inches (8.9 by 6 cm) at its widest Point and contains parts from the Gospel of John in Greek, on both sides. It was among a group of Papyri acquired on the Egyptian market at Oxyrhynchus in 1920 by Bernard Grenfell.The Original Transcription and Translation of the Fragment of text was not done until 1934, by Colin H. Roberts. The First Editor dated the Fragment to the first half of the second century (between 100-150 AD). Recent research points to a date nearer to 200 AD, but there is as yet no Convincing Evidence that any earlier Fragments from the New Testament survive.

This “St John Fragment” item Is part of our Special “Ancient Biblical Mystery Collection.” This is an Exclusive: Signed, Numbered, Limited Edition Collection of both, Real and Reproduction Relics Manufactured by Reel Art.

This Amazing Replica of the Original Codex actually comes to you on Papyrus Paper from Egypt where the original item was Discovered. What you actually get is the Two Sides of the Papyrus Document together to make one Double Sided Replica of the Original Document. Our St. John Gospel Papyrus is a larger scale and measures: 3.75 Inches wide x 5 inches high. It is cut out to the Exact Image of the Original Codex as seen in pictures. The Replica Fragment comes inside our High Quality Acrylic Magnetic Sealing Display Frame. The Frame measures 4" x 6" x 1" inches. It is a great for display upright or flat on your desk or table.

In addition, you will get a Information Pamphlet which tells about the Fragment and it's history. This includes a Translation Page that actually shows the images letters in Greek that were shown on Papyrus 52 and what was missing and a Full Translation into English from Greek. You will also get a Press Release copy from a Newspaper Dating 1896 that explains some of the Recent Discoveries in Oxyrhynchus Egypt by Grenfell and his partner Hunt. These include the Sayings Papyrus of Jesus that, until that time,  was yet to be discovered. Also included is your Signed, Numbered, Limited Edition, Certificate of Authenticity.