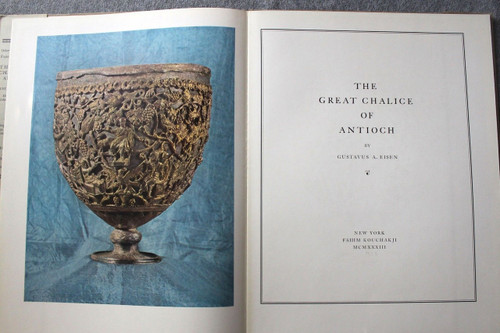 This is an Original First Edition (1933) of the, Oversized, Hard Back Book The Great Antioch Chalice by Gustavus A. Eisen.

This Hard Bound Book is in Excellent Condition. It is an Oversized (10.5 x 13.5) Hardcover Edition. This Edition was originally published and sold at the World Exposition in 1933 and also to viewers of the Antioch Chalice as it was on tour.  It contains twenty-two pages with a Color Frontis and Grayscale pictures throughout.  This book does have some very light foxing on inside.

The original remarkable Ancient Antioch Chalice was discovered in Antioch in 1910 and was believed by many to be the Holy Grail of Christ. It fits many of the traditional specs: it was found in a city where Apostles were living shortly after Christ's death, and it has a Plain Silver interior Bowl decorated by an elaborate shell. In the year 1910, near the world-famous city of Antioch in Syria. Workmen labor at the digging of a well, and, as the work proceeds, the piles of dirt taken out of the ground grow higher and higher. Suddenly the work stops, as one of the workmen spots a Gleam of Metal shining in the sunlight. Carefully he and his companions remove it from the surrounding dirt. As they scrape away the centuries-old crusty residue, they find that they have unearthed two cups, one set within the other. The inner cup is very plain and unprepossessing, but the outer cup is made of silver. The cups pass out of their hands and into the possession of the experts. Slowly the word spreads, and museum curators and historians from all over turn their eyes toward the two cups, for now the word is out that perhaps here, near the city of Antioch, in the year of Our Lord one thousand nine hundred and ten, the greatest treasure of them all has been found. For it is believed that the inner cup might be that most fabulous of all treasures-the Holy Grail!

The Evidence About The Antioch Chalice, Paperback Book, 135 Pages, Lots of Pictures and Details

The Evidence About The Antioch Chalice, 135 Pages, PDF Download Book

The Evidence About The Antioch Chalice, 135 Pages, PDF Download Book

The Evidence About The Antioch Chalice, Paperback Book, 135 Pages, Lots of Pictures and Details