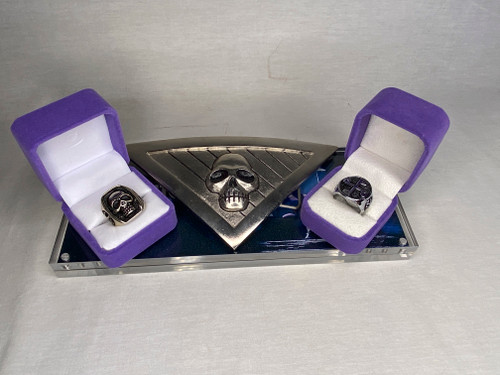 These Three Items are part of our "Phantom Collection." This is a Very Detailed, Signed, Numbered, Special Limited Edition, Movie Prop Replica of the Phantom Skull Belt Buckle, The Ring Of Good and The Ring Of Evil as seen in the hit film The Phantom (1996) starring; Billy Zane, Kristy Swanson, Treat Williams and Catherine Zeta-Jones. These Real Prop Replicas are Artists Renderings made from Pictures of the Real Props that appear in several Books, Photographs and as seen in the Film. Each item Comes Complete with a Double Sided, 4 x 6 inch, Full Color, Professionally Printed, Certification Card. This Documentation contains Poster Art and Explains in Detail about each of the Phantom Replicas and how they were used in the film. These Real Prop Replica Versions of the Famous Phantom Buckle, Ring Of Good and Ring Of Evil are just as they appeared in the film. They Come Brand New and Rings are each inside their own Purple Velveteen Jewelry Box.

The Movie Prop Replica Buckle is Solid Aged Plated Silver Metal with the Classic Skull Emblem carved out of the middle. It measures 8 inches x 4 inches x .25 inches and is convex to fit around waist. On the back the Skull Buckle has a Loop and a Prong so you can attach to any Basic Snap Belt. Just place the Belt through Loop and Snap, then place the Prong in the hole on the other side. It does not get any easier than that. Whether this is for a costume or just to wear on a night out with friends, this Movie Prop Replica Phantom Skull Buckle is a must have item!
On Each Side of the Ring Of Evil is Emblazoned the Mark Of Good and On Each Side of the Ring Of Good is Emblazoned the Mark Of Evil. Both Rings are made out of Aged Plated Metal and measure about USA 11 in Ring size.
These Phantom Real Prop Replicas also Come Complete with a High Quality Magnetic Sealing Acrylic Display Plaque. This Plaque Seals Magnetically and not with screws. The Display Plaque measures in Inches: 10" Long x 4" Wide x 1" Thick. It Comes with Artwork From Film and is Perfect to Display Your Items On.
×