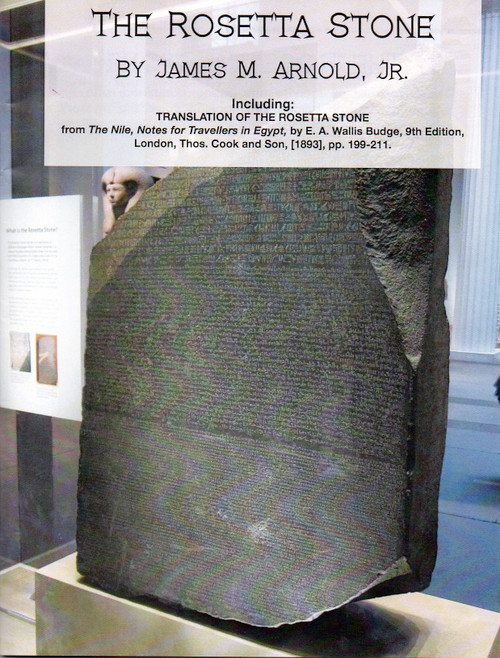 The Rosetta Stone is a Ptolemaic Era Stele written with the same text in two Egyptian language scripts (hieroglyphic and demotic) and in Classical Greek. It was created in 196 BC and Discovered by the French in 1799 at Rosetta, a harbor on the Mediterranean coast in Egypt, and contributed greatly to the Decipherment of the principles of Hieroglyphic Writing.

The Skill of reading Hieroglyphics was lost until the Discovery of this Slab found at Rosetta. It now sits in the British Museum.
Included here is a Signed copy of the book The Rosetta Stone by James Arnold. It is a Full Size, 8.5 x 11,  Full Color, 37 page item. It includes the Translation Of The Rosetta Stone, by E. A. Budge [1853]. The Book basically explains the basic history of the Artifact to the 21st century. The Book also includes various Historical Newspaper Articles as they have appeared through History and Actual Historical Photos of the Real Rosetta Stone.
×