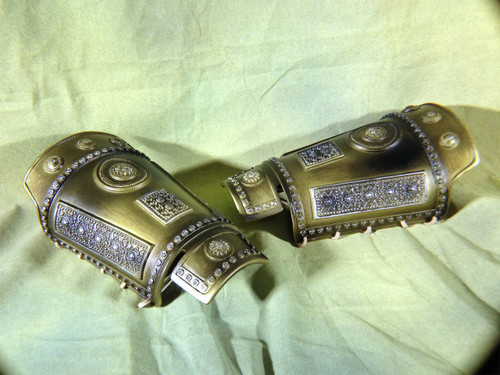 An adaptation of Homer's great epic, the film follows the assault on Troy by the united Greek forces and chronicles the fates of the men involved.

From the hit film Troy (2004) starring: Brad Pitt, this is a very detailed set of replica Gauntlets like the ones Hector used in the film. They were painstakingly made from pictures of the original prop set. These Gauntlets are made out of solid resin with leather like strings to tie in back. They are finished with a aged Gold look just like the original props. They measure: 8 inches in length x 4.5 inches in width at top of forearm and 2.5 inches width at lowest part over hand x 3 inches deep.

With a set of these on you will be a hit at any party.