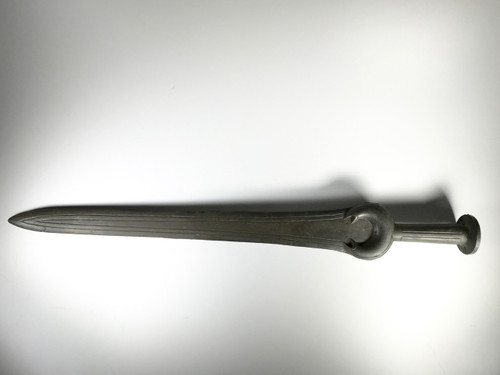 This film is An adaptation of Homer's great epic, the film follows the assault on Troy by the united Greek forces and chronicles the fates of the men involved.

From the Epic film Troy (2004) starring: Brad Pitt, this is a Real Prop Stunt Battle Sword from film. This is one of Three Styles that we have. The sword is made out of a heavy and durable rubber material and has a metal wire in middle for stability. Swords like this were actually used in the Battle Sequences throughout the film. The Real Prop Sword is in Excellent Screen used Condition and measures: 27 Inches in Length x 3.5 Inches in width x 2.5 Inches in Depth. Sword is painted Bronze in Color. Sword is also aged to look old.

This item Was originally obtained by us from Profiles In History auction house. It was authenticated by the auction house a second time and by us a third. This item will come with a certificate of Authenticity from from us and also a copy of the original invoice from the auction house

Relics Of The Passion of Christ 38 Page Book

Shroud Of Turin, Pendant. Gold Metal. comes with Free Saga of the Shroud Book, and Chain

Shroud Of Turin, Pendant, Silver, Metal, comes with Free Saga of the Shroud Book and Chain