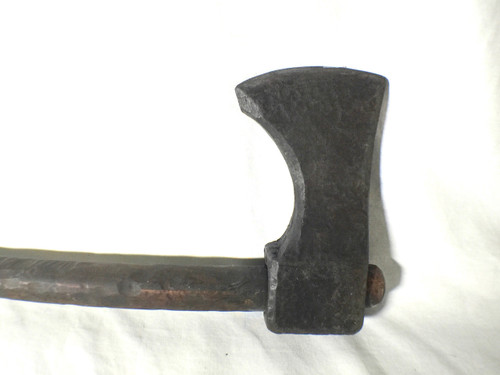 Picking up directly from the previous film, vampire warrior Selena and the half werewolf Michael hunt for clues to reveal the history of their races and the war between them.

From 2006's "Underworld: Evolution" this is a Screen Used Real Prop Elder's Battle Axe. It has a aged wood handle with hard rubber head. The Battle Axe measures: 32 Inches Long X 1.75 in Diameter at handle X 9 Inches in width at Axe Head X 2 inches Depth at axe head.  Even though it is a stunt piece the Axe does have some weight to it. It weighs about 5 Pounds. The Prop Axe is aged to look old with a patina type Faux paint on Axe head and wood is stained. At hilts there is a piece of leather around it with studs. It was used in one of the many stunt battle scenes in film.

We actually have two of these. They both look the same, besides some minor markings on each. Only one is pictured.

Comes complete with Letter of Authenticity.