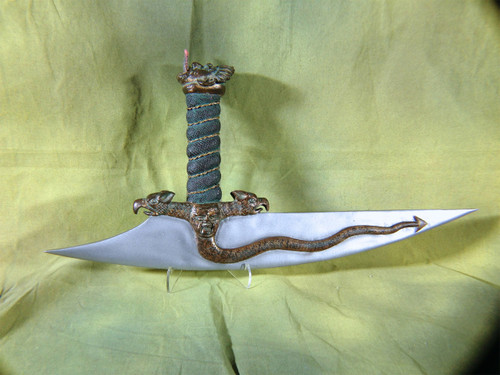 In 1962, the United States government enlists the help of Mutants with superhuman abilities to stop a malicious dictator who is determined to start world war III.

This is a Replica of the sword that was used by the character Azazel (Jason Flemyng) in the production of the Bryan Singer X-Men origin story X-Men: First Class. Charting the coming together of Professor Charles Xavier (James McAvoy) and Erik Lehnsherr (Michael Fassbender), also known as Magneto, the film goes from wartime Auschwitz to 1960s Cuba, with Magneto, Xavier and a young group of mutants banding together to fight the nefarious Sebastian Shaw (Kevin Bacon).

One of his two trusty blades, this sword was used in Azazel’s right hand as he fought alongside Shaw throughout the film, both at the CIA facility housing Xavier's recruits and in Cuba in the midst of the Cuban Missile Crisis. Made of solid resin, the weapon features a long blade that runs down the forearm with ornate devil and dragon-like detailing along the blade and grip. The pommel of the blade is a devil’s head with a Red tongue spike. It Measures: 21 Inches Long X 10.5 Inches Wide X 2 Thick.