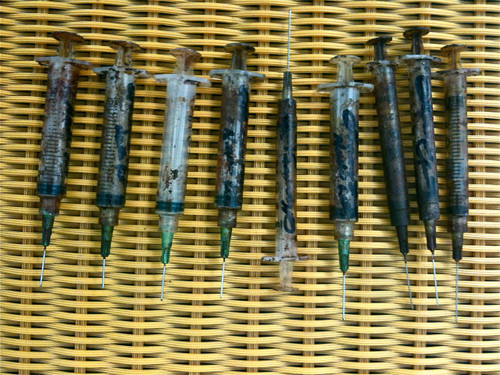 A door without a padlock is found and Xavier pushes in the door which starts a count-down timer. Another tape is found, in which Jigsaw condemns Xavier for being a drug dealer. A pit with thousands of used hypodermic syringes is revealed, with a key to an antidote hidden within. Instead of searching the pit himself, Xavier throws Amanda in. Amanda retrieves the key, but Xavier fails to unlock the door before the timer runs out. The antidote remains locked up.
From the hit horror film "Saw II" (2005) starring Tobin Bell and Shawnee Smith, this is a Autographed Prop Syringe from the needle pit. It was signed in person from Shawnee Smith and measures appxomately 5 inches long. There are nine syringes available and they are all very similar as pictures shown. You are just purchasing one syringe with your order.  All Prop Syringes are in excellent screen used condition with dried blood.
These Prop Autographed Amanda's Needle Pit Syringes Props were obtained directly from the Production Company "Twisted Pictures" that made the film and syringe comes with a letter of authenticity signed by Producers  of film Mark Burg and Oren Koules.
×